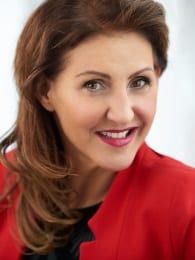 Barbara Stegemann is the CEO and Founder of The 7 Virtues, a company that sources organic oils from countries experiencing turmoil. Her entrepreneurial vision was formed after her best friend soldier was severely wounded in Afghanistan. Understanding that supporting Afghanistan’s economy was a key to building stability for its people, Stegemann created The 7 Virtues Beauty to encourage change and to reverse the effects of war and poverty.

Stegemann became the first woman from Atlantic Canada to land a venture-capital deal on the CBC TV show Dragons’ Den for The 7 Virtues Beauty Inc. She went on to become the “Top Game Changer” in the history of the show for her social enterprise.

Since then, Stegemann was named one of Canada’s Top 100 Most Powerful Women in Canada; won the Ernst & Young ‘Entrepreneur of the Year Award in the emerging Entrepreneur category for Atlantic Canada’; was ranked as one of Profit Guide magazine’s “Top 30 Cool and Fabulous Canadian Entrepreneurs”, her fragrance collection won Chatelaine’s “Beauty 100 Award”; received the ‘Women Innovators Award’ from the US State Department at the APEC Women and the Economy Summit; and was also made the first female Honorary Colonel in the history of 14 Wing Greenwood base, Royal Canadian Air Force.

Stegemann is the author of the bestselling book, The 7 Virtues of a Philosopher Queen. She has also been featured in major media around the world. Barb lives in Halifax with her husband Mike and her children, Victor and Ella.